The DERO Stargate RC2 testnet will be updated for open testing of some critical protocol changes, which will improve many of the features within our previous releases. The updates are planned for release next week and will include protocol changes, wallet updates, and some much needed solutions to current limitations in the blockchain space. It also marks the furthest departure from our Atlantis codebase that is currently live on mainnet. All of the previous iterations have pushed the limits on how blockchain can protect user privacy, remain secure from attacks, deliver performance suitable for global usage, enable new technologies to be built upon it, and achieve true decentralization. This update will focus on decentralization.

A New Era of Decentralization
DERO relies in part on Proof-of-Work consensus for securing the network and distributing mining rewards. Currently, many blockchain protocols fight to reduce tradeoffs in efficiency, accessibility, and decentralization, where expending more effort to increase efficiency may place limitations on decentralization. We hope that our solutions challenge the existing inefficiencies of mining and allow everyone to be rewarded for their network participation. It all starts with reducing the carbon footprint of hardware.

Efficiency
The open source mining algorithm, AstroBWT, was developed to demand much less power from any device used in mining. It is not surprising that ARM processors, those commonly found in mobile devices, produce highly efficient and competitive hashing power compared to GPUs (video cards) and even many CPUs (desktop computers). It is with this in mind that there is immense potential for allowing anyone to mine from devices that they already own and be rewarded for it.

Accessibility
We want everyone to be able to participate in securing the network, but also have the means to access and use DERO. Not wanting to have users rely on exchanges in order to obtain coins, the focus shifted toward making mining more accessible and to distribute the rewards to more people. How do we achieve this? In most proof-of-work projects, mining pools tend to benefit by centralizing the hashing power of many miners in order to win the race in finding the next block in the chain. Those rewards are then distributed to miners based on the amount of shares contributed (amount of work performed). The problem is that a large enough pool of miners could centralize the distribution of rewards to a small subset of miners in relation to all other miners on the network. Mining needs to be more distributed.

Σ-Mining (Sigma Mining)
Mining in DERO has been completely reworked to vastly decentralize mining rewards with the introduction of Σ-DAGs (SigmaDAGs), which are simply DERO blocks made up of smaller Σ-Blocks (SigmaBlocks) that are constantly emitted and can be added to either main or side blocks. Even more plainly, the Σ-DAG allows on-chain storage of mining data, which effectively turns DERO into one large mining pool. Every miner on the entire network will receive mining rewards based on the amount of work that was contributed, thus creating a truly decentralized network and distribution of rewards. It also greatly improves handling of massive network traffic, where each daemon can support over 10,000 connected devices, acting as a way to pool all of your devices. 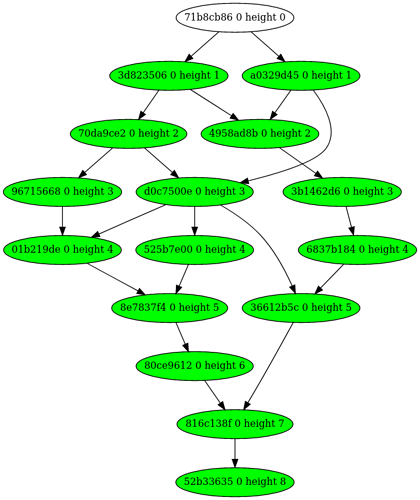 An example of reward distribution:

In addition, each daemon can become it’s own pool, which tracks mining shares from devices connected to it. The daemon itself will retain a fixed fee (currently 1/19 of total mining rewards probabilistically averaged) for the daemon operator, the rest will be distributed to all miners that contributed shares to that daemon. For most miners, they will be mining using their own daemon, so all rewards and fees will be credited.

What are we testing?

Stay tuned for the official release and join us in testing and tuning the next iteration of Stargate RC2.

Thank you for your continued support!