I’ve managed to mine 1 block and 2 mini blocks using xmrig, connecting to ; daemon+wss://minernode1.dero.io:10100. Yet nothing is showing up in my StarGate wallet. Any help appreciated.

It seems to be a lottery. I have solo mined a ton of blocks in the last week but have only been paid for a handful of them. Seems to be about 1 in 6 that I actually get paid for. According to support this is because others are submitting the same blocks at the same time and have done more work on the solution. Personally I’ve never mined another crypto currency where this has happened so often, if ever that I’m aware of. You usually get paid for the blocks you find, but not with Dero on Stargate it seems.

I don’t know if there is something like an experimental ASIC or massive GPU farm on the network gobbling up the blocks that others are finding or there is an issue with the core code but something definitely doesn’t feel right about it.

Will continue to support Dero as I love the project and have faith in it but unless there is a fixable issue right now it looks like mining may be dusted for multi CPU rig miners like me.

ok difficulty goes up but not this much 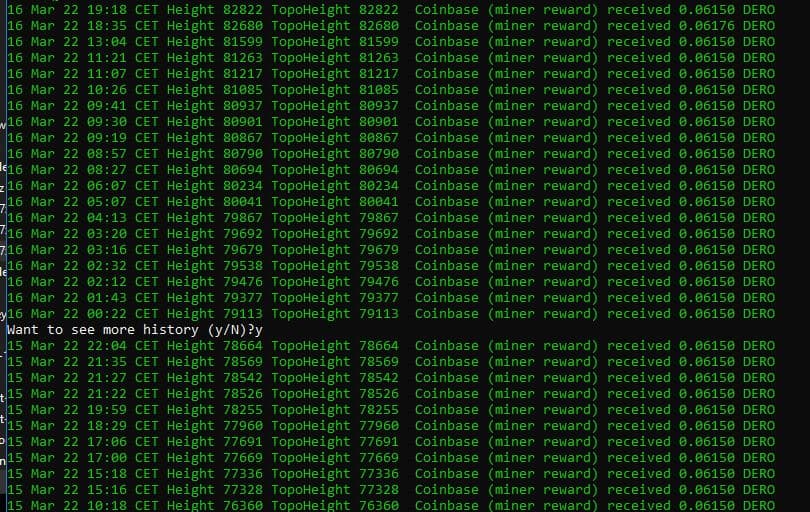 need answer, on minerstat.com with 2mh on AstroBWTv2 give you around 14 dero per day…lol

I’ve only found 3 mini blocks and 1 block in the last 4 days (which is awful in itself) but have only received 0.06150 Dero which is a proper kick in the teeth.

4 days worth of electricty powering 7 x fast AMD CPU rigs plus the $48 a month I’m paying for the VPS to run my node.

little question: did someone ever receive 0.615 reward ?

little question: did someone ever receive 0.615 reward ?

No, it doesn’t exist according to support. I asked the same question and was told the block reward is 0.06150 - which made no sense to me as blocks are made up of 10 miniblocks - it even says a block is 0.6150 in the docs - but it never pays out. Maybe that 0.6150 block reward was on the pre-stargate core but the fact we still have blocks and miniblocks on the new one doesn’t make that explanation work either. It’s very confusing.

I’ve found one miniblock since I last posted in here and wasn’t paid out for it. It appears Dero mining is finished for small independant miners. It seems like a huge farm or two are completely dominating the network now. I’m not sure how well that bodes when you consider the now apparent effectively centralized nature of a privacy focused blockchain.

Fingers crossed this is reversible.

Going to shutdown my node and move my mining onto something else for the time being.

lot of confusion in rewards work…can someone try to explain this :

Also why would a block need to be found at all if it’s made up of 10 already found miniblocks? Surely the fact that 10 miniblocks have been solved means the block has already been solved no? The miner clearly shows that you can find blocks and miniblocks but why even have the blocks mentioned if they aren’t relevant? What’s the point? Just mention miniblocks - in fact just call the miniblocks blocks to save confusion. The whole thing doesn’t really make any sense to me.

10th miniblock is the block or final miniblock making up the block and sending to the network (9x or so difficulty). All miniblocks reward equally at base + tx fees distributed. Then the 10th and final goes to the integrator address of a daemon.

Thanks for explaining that. Hopefully one day in the future it will be possible to mine it again but for now I’ve switched my rigs to other assets and deleted my Dero node as I wasn’t receiving the rewards for all of the blocks / miniblocks I was finding. That situation morphed into finding pretty much nothing at all for days. Not sure what has happened to the network or who is gobbling up all of the blocks that others are finding but I hope it gets addressed in the not too distant.

Try for a week or two. Probability works good if time intervals are appropriate.

I was mining for well over a week before it stopped finding blocks altogether. Hopefully you’ll trust what me and other miners have been telling you soon and realize that there is a serious problem with the current mining situation on the network.I’m not sure if it’s a simple error with more recent core / miner binaries or if somebody has managed to find a way to exploit the block finding mechanism on the network or maybe that centralised farm power mining is what you were going for but for now, solo mining is impossible for independant miners like myself with modest setups.